Growing up in a large Australian Chinese family in the suburbs of Northern Sydney, Kylie Kwong was never shy or embarrassed about the Cantonese food she grew up with, and loved.

“My two brothers were more sensitive to it than me,” said Kylie to George Negus of the ABC. “For example, when we’d have family dinners at home my brothers would bring their Australian friends home – you know, kids from school. And sometimes they would get a bit shy and ask Mum to put the chopsticks away. When my friends came home, I’m like, ‘Get the chopsticks out.’ I was so excited and proud about the food. But I was just a little bit different.”

Kylie grew up in North Sydney with her father Maurice, mother Pauline and her two brothers. As a third generation ‘ABC’ (Australian born Chinese) food was always an important part of Kwong family life, and many of the recipes in her many cookbooks have been handed down from both of her grandmothers, who she was lucky to spend a lot of time with growing up. Pauline says of that time, “She’s always been creative, but I thought she was more artistically inclined, in painting, that way and that. But I really didn’t think that she would actually end up a chef. She often cooked for my mother who played mah-jong there when I was working. If she was home they’d employ her to do some cooking and get them lunch so they wouldn’t have to stop playing mah-jong, virtually. But she loved it. She loved cooking right from a very early age.”

Kylie’s great-grandfather Kwong Sue Duk brought the family name to Australia in the early 1850s, travelling by boat from Canton to Darwin. He travelled back and forth from China while establishing businesses, including a general store and four goldmining leases. He also managed time to acquire four concubines, and fathered 24 children.

Kylie’s great-grandfather’s influence can still be felt today, as there are now more than 800 Kwong family members who meet regularly for reunions. “These Kwong Sue Duk reunions are so important to me,” she told Negus. “It gives me a wonderful sense of belonging. I know where I’ve come from and I guess it gives you a confidence to go out into the world and do what you love to do and follow your dreams.”

It might be an easy statement to make now, but Kylie is not shy about the fact that she didn’t end up in cooking until she seemed to be corralled there after high school. She tried advertising first, and then after a series of odd hospitality jobs she began working in the kitchen of chef Neil Perry’s Rockpool restaurant. She started her apprenticeship at the age of 25, and within two years was head chef at Perry’s Asian-themed restaurant, Wockpool. She followed this up with a time as head chef of Bill Granger’s debut restaurant, bills in Darlinghurst.

The collaboration with Granger proved fruitful. In 2000, they went on to open Billy Kwong, a small, intimate yet vibrant 20-seater space located on Sydney’s famous “eat street”, (Crown St, Surry Hills), modelled on a traditional Chinese eating house. Less than a year later Kylie bought Granger out, and the restaurant continued its success in Crown St until 2014. Caving both popular demand (the nightly queues for tables were testament) and Kylie’s own desire for a larger space to work with, she opened a larger venue in Potts Point.

Since then, the new Billy Kwong has been revitalised and passionately celebrates locally grown, organic and biodynamic produce, as well as sustainability and the use of Australian native bush foods. Kylie adopted the organic and biodynamic stance back in 2005, when it was seen as revolutionary and ahead of its time. 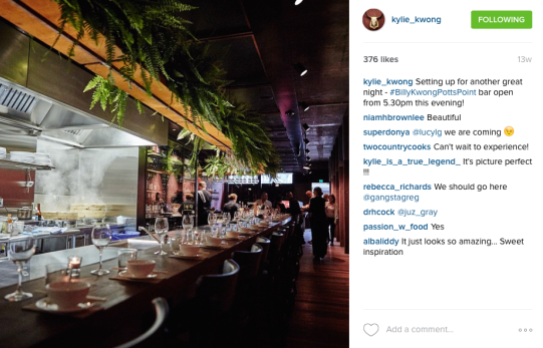 At the very core of Kylie’s hospitality philosophy is the restaurant motto, “celebration, collaboration and community”. The Wayside Chapel in Kings Cross can vouch for her sense of community. Wayside Chapel’s CEO and Pastor Reverend Graham Long said in a press release, “As a provider of food to some of the most disadvantaged people on and around the streets of Kings Cross we feel privileged to have Kylie Kwong as our ambassador.

“With Kylie’s help we will further embrace the use of our sustainable, rooftop garden in the cooking of our meals at Wayside and continue to use the fresh produce in our meals.” Billy Kwong uses Wayside Rooftop Honey and also fresh herbs such as Warrigal greens, Vietnamese mint, lemongrass, an even eggplant from the rooftop garden. The restaurant also donates 100 portions of hokkien noodles weekly to be sold in the Wayside Cafe.

Kylie’s policies also tie in with her Buddhist belief system, which a floor manager at Billy Kwong introduced her to. “If one’s spiritual life is clear and sound, then every other level – mental, emotional, physical – falls into place,” she said in her interview with Negus. She was named Master of Ceremonies for the Dalai Lama’s Australian visit in 2009, an experience she described as “one of the great weeks of my life. I still can’t believe that it actually happened. We spent all week with him backstage in Sydney.

“His practice just really encouraged me to keep practising and doing what we’re doing, and to always try harder and harder in everything we do. And to know every single thing that we feel, or think, or do, makes a really big difference.”

These Buddhist beliefs, which she shares with her partner of nine years, the artist Nell, will feature prominently in their wedding ceremony, which is scheduled to take place next year. The walls of Billy Kwong feature many of Nell’s vibrant paintings.

These days, when she’s not in the Potts Point kitchen, you’ll most likely find her and some of the Billy Kwong team at the Carriageworks Farmers Markets every Saturday, where delicious treats such as steamed pork buns, pork dumplings, and pancakes blow up Twitter and Instagram feeds weekly (as well as get eaten by the hundreds!).

Carriageworks Farmers Markets is at 245 Wilson St, Eveleigh NSW 2015  Open every Saturday from 8am – 1pm

The Most Popular Netflix Shows Nobody Is Watching

By Emily Vescio “What Should I Watch on Netflix”  Typing this simple phrase into Google (or Bing, I don’t judge) in a frantic attempt to not sit and re-watch the same episodes of Brooklyn Nine-Nine for the third time this week, and finding the same list of shows over and over. Not to mention they’re […]

By Oliver Brett Oliver asks people what they think of gaming – who plays, negative connotations, whether gaming has links to violence, and how genuine online friendships are. Listen here:

BY EDOARDO MESITI @EdoardoMesiti Whether by birth or by choice, these celebs are animals. 1. Jay Z Sean Carter’s stage name is actually a breed of bird. The “jay” is a medium sized bird part of the crow family.   2. Meagan Fox She’s as foxy as her name and yes, her surname is real. 3. […]

Our final show for semester 1! Thanks to all our w

That's right folks, it's Friday! Today is going to

Sources say that 75% of Finnish park rangers’ wo

We're too sexy for most things ... but not too sex

In quarantine? So are we! And we're still making r

Tune on it to our show tomorrow from 11am tomorrow

🌍 There are around 2 billion WhatsApp users aro